No Justice for Latin America's Most Wanted Terrorist

"No Justice for Latin America's Most Wanted Terrorist"

In a regrettable travesty of the United States judicial system, Luis Posada Carriles, a long time CIA operative with an extensive curriculum in torture, terror, conspiracy and murder in the United States, Honduras, Guatemala, el Salvador, Venezuela and Cuba, was acquitted yesterday in El paso, Texas, adding another blot to US battered image in its war against terror.

Since entering the from , Posada Carriles was accused of illegal entry by Homeland Security, federal prosecutors and others, while no reference was made to his will documented lifelong crime spree. and have consistently requested his deportation to face charges of torture, disappearances and murder.

Yet, his most heinous crime, revolves around masterminding the mid-air explosion of a Cubana airliner off the coast of in 1976, killing all 73 on board. In the late 90’s, he directed a bombing spree in tourists resorts in in which, an Italian tourist was killed and another 12 were seriously wounded.

Although these issues were made public during his trial through ample documentation, eye witnesses and legal findings, Judge Kathleen Cardone and the Jurors chose to ignore all 11 counts of illegal entry and his well documented crimes.

Prior to his trial, Posada Carriles spoke openly of his deeds on every Spanish speaking AM radio stations and TV talk shows in Miami, gave interviews to national media, provided tape recorded interviews for books and investigative journalism, confident of his protection and of the positive outcome of his day in court.

It is extremely difficult to reconcile shoe bomber Richard Reed life sentence with no possibility of parole and threeconsecutive life sentences in his failed terrorist attempt, while Posada Carriles was found not guilty, in numerous successful terrorist attacks. 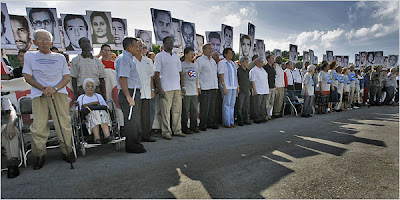