Laying the Groundwork for Another 1912

Approximately fifteen years ago, a well funded campaign organized by the US-AID, NED, right-wing Cuban-American groups in south Florida and elsewhere, was poised to create an Afro-Cuban/anti-Castro leadership corps, charged with fomenting oppositions groups inside Cuba, disguised as Independent Journalists, Farmers, Librarians, Healthcare and others and to dilute the historical Afro-American support of Cuba. Evidently December 1, 2009 was their chosen D-Day.

After an intensive lobbying campaign of phone calls, e-mails, letters to the editor and Human Rights Organization’s fraudulent assessments, an explosive letter entitled “Afro-American Group Challenges Cuba on Race” scathingly described the brutal government-imposed racism in Cuba, which captured the signature of over 60 prominent Afro-American and Caribbean scholars and social researchers.

This corrosive document was most likely conceived, structured and promoted by Dr. Carlos Moore from Brazil, in a grand finale of his 50 year old, visceral hatred against the Cuban government; forcing the Afro-American community and others, to take sides in this thorny, divisive issue.

Documenting real or bogus statistics describing the existence of slavery, racism, segregation, white supremacists or lynching resonates immediately with blacks everywhere, who have had the unique experience of being victims of this human scourge.

Therefore, it was not necessary for some willing to sign this spurious document, to be knowledgeable of Cuba’s very complex, intractable 500 year old history of slavery and its aftermath or to have ever been in Cuba for that matter, to align themselves with such a vivid and painful part of our lives. This document was simply talking about a rope, where a family member had been hanged!

Publishing this open letter has been a treacherous attack on hundreds of Afro-Cubans intellectuals inside Cuba, who for the past twenty years or more, have waged an honorable and discreet struggle in defense of the plight of the Afro-Cuban people, as they walked a tight rope, not to be perceived as agents of foreign governments our mouthpieces of this and other Afro-Cuban groups, bent on subverting the Cuban government.

In every opportunity I have had, I willingly shared with Dr. Moore and others, the dangers of disrupting this ongoing process in Cuba, which has exhibited signs of progress, albeit much too slow for most of us. We emphasized the importance of unity and a uniform approach in presenting our peoples need.

Yet, it seems, personal ego, financial gains or international recognition means more to some, than solving the injustices they are denouncing.

Although I am not a historian, anthropologist, psychologist, writer or researcher, I have been forced since the late 80’s to become part of this discourse, notwithstanding my simple, ordinary writing and frequent brutalization of the English language, in order to express my concerns and potential consequences of the slippery slope we were entering.

Some of these concerns can be found in more than 500 articles in afrocubaweb, Cuba Journal, Cubanews, the Cuban Nation, blogs, letters to the editors in the US and the Caribbean, speaking engagements in Churches, Schools, Arts Festivals, Universities, Social Groups, Local, County Government, the US Congress and Senate.

For these reasons, we have been aiding Guantanamo province with its very large Afro-Cuban population, who are the prime target of the US Embargo/Blockade because of their limited family foreign remittances, no joint ventures/corporations paying wages in hard currencies and literally a non-existent tourist industry with access to hard currency, our humanitarian groups have pumped millions of dollars in health, education, physically challenged and sports donations, intended to mitigate their basic sufferings.

Tens of pleas for help for the elderly, infirmed, children or after natural disasters of this region, have gone unheard by these grieving Afro-Cubans, engaged in writing letters and books.

How do they expect to stop a hungry baby from crying, an elderly in pain, an infirmed without adequate medication or a physically challenged without a prosthesis to make his life bearable?

Not even technical/professional literature for medical schools, they have been willing to provide and would rather label those extending a helping hand as Castroites.

The contradictory behavior of these individuals, interested in increasing the suffering of the same people they gladly provide with a flash memory to hear their diatribe, religious or double-edged literature, hopes of a better future while starving, has never made sense to me.

Nor have I ever bought into their extreme, paternalistic Africanism, when communities ravaged by unemployment, drug addition, violence, prostitution, murder or ignorance, lie a few miles away from their gated communities and they are oblivious to their hopelessness and solely interested in what is taking place in Cuba.

I am not disputing the existence of a pervasive inequality, poverty, segregation and the overdue need for preferential treatment of Afro-Cubans to be instituted immediately in order to level the playing field. No one, on the other hand, can deny how much progress Afro-Cubans have achieved in the past 50 years, but that is beyond the point. 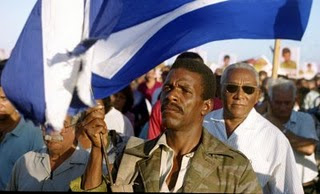 Thousands fought, were injured and died in an effort to create an egalitarian society, which for most, is yet to be achieved. Whites in Cuba continue to monopolize government, administration, management, education, best neighborhoods, travel, cars and every possible social development of Cuban life. This is an irrefutable fact!

Blacks to a great extent continue to live in marginal, overcrowded neighborhoods, with high prevalence of illegalities, incarceration on lower educational levels. Cuba is different than most other countries and can not therefore mimic those societies in which the wealth of the nation is concentrated in the hands of the selected few.

This is and must be the cause of our struggle, not to undermine and hopefully create a system similar to our places of residence, where these glaring inequalities are beyond repair.

As it was partially stated in the response of Afro-Cuban intellectuals, Cuba has done more than all nations together to liberate countries in Africa under Apartheid. Cuba has educated more sons and daughters of Africa than anyone else. Cuba has provided more healthcare and education to the underdeveloped world than the rest of nations combined.

But this cannot be a cop out; this is a failed argument, not to confront blatant abuses that subsist in our country. Cuba is maybe the only country in the world that can exhibit and have the courage to do what all others have ran away and hidden from.

The time has come, for our government and others around the world to come clean, admit publicly that everything visible and invisible in our countries and in Europe, was built and exists with tons of tears, sweat, blood and millions of lives of brutalized blacks.

Millions of Africans ripped away from our homeland, were not only deprived of our language, culture, religion, we were forced to create billions to enrich Europe and cities that are today world heritages, while their descendents are still living in slums of the XIX Century.

Beautiful cathedrals in Spain are adorned with the finest woods of our continent, while natives in our countries are being buried in makeshift coffins, because all of our forests were ravished.

It is no accident that many still are angry at President Barack Obama for accepting President Hugo Chavez gift, The Open Veins of Latin America, which depicts like no other what these God-fearing, democratic-posturing, election-demanding folks did to our peaceful natives and our enslaved forefathers.

Cuba was a model, a symbol to the world, when it demonstrated that Batista, his Mafia friends and the US government backing could be defeated in 1959.

Cuba was and continues to be a model to the Third World for what it has done since for its people and millions around the world. Therefore, nothing can justify keeping this nation from wiping its slate clean of all vestiges of racism, inequalities and segregation, that puts our country on the same social level as its neighbors and allows the worst human rights violators to attempt to take our country to court.

Worst yet, is that Afro-Cubans have been educated, they have been thought to think critically and they are able to discern right from wrong. These factors make it impossible for any one in government in Cuba, to pretend this burning issue can be placed on the back burner or swept under the rug.

Our country will never achieve its rightful place in history as it deserves, as long as the majority of its population, has not been transformed and Cuba is not allowed to become the society with the highest per capita of educated Blacks in the world.