As We Push the World Towards Disaster

"As we push the world towards disaster"
Alberto N Jones
November 10, 2009

As I read “Prejudice guides speculation over Fort Hood killings” by Pierre Tristam, Daytona Beach News Journal 11/8/09, I am compelled to reflect into another of his in-depth, objective, analytical journalism that we have come to expect and respect; when he carefully lead us through the violent scourge that have engulfed and is devouring our nation.

As Tristam tries to stay clear of the incendiary speculation and prejudicial Muslim implication in this horrendous crime, a biased and complicit media have conspicuously ignored other despicable acts committed by those without an easy scapegoat background.

Attempting to prevent the root cause of the massacre in Fort Hood and others to come, we marched, held vigils, wrote letters and pleaded with everyone bent on unleashing a monstrous, unjustifiable, lie-laden war on Iraq, which is returning to our shores, sons, daughters and husbands, crazed by hundreds of maimed, charred and mountains of dead bodies that may have changed their lives forever.

When we see a physician who has been trained to help thousands of mentally deranged, morally ravaged soldiers by the horrors of war, doing exactly what he was supposed to prevent, paints a troubling picture of the future, if only 1% of those that have been deployed to that inferno, may be affected by this silent, dreadful syndrome.

Not withstanding the actions of Timothy McVeigh, Allen Muhammad, Malik Hassan and others, all with a common denominator military background, those who have fanned the flames of hatred against Viet Nam, Iraq-I, Balkans, Iraq-II, Iran, Afghanistan and potentially Pakistan into another conflagration; continue today to spew their hate, beat their war drums and are constantly trying to push the United States deeper into the Afghanistan quagmire, from where no nation have ever been able to extricate itself without irreparable damage.

Our efforts to create peace, love and understanding among men may fail once again, as we refuse to tire, give-up or learn to cope with this man-made catastrophe. 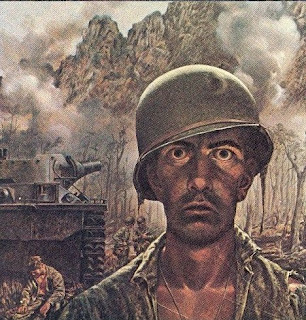