May 20th. The most tragic date on the Cuban calendar. Part I

In a few hours, the calendar will mark another twentieth of May,  the most  fatidic  date in Cuba’s convulsive history, which has shaped like no other day, the views, emotions, frustrations and behavior of millions of its people.

The first recorded tragic May 20th, began at noon with the lowering of the American flag and the rising of the Cuban flag at the Morro Castle in Havana’s harbor.  It is said, the Cuban people were joyous to see the Americans leave after occupying our country for the past four years and in so doing, we were made to believe, we were a free, independent and sovereign nation. 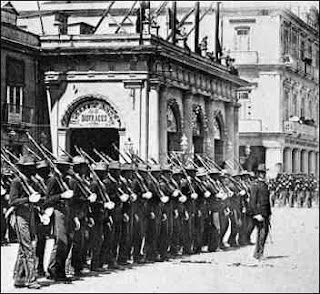 Gratitude to our powerful neighbor to the north was instilled in us and celebrated with huge yearly parades, bands and flutes, honoring a pseudo-independence and a liberation day that never was.

Even today, 110 years after this fateful day, powerful Cuban American interests in the United States and in other large Cuban communities around the world, receive unqualified moral support from the US State Department to honor, keep alive and perpetuate this fatidic day among younger generations.

Facts of life would soon make it clear to most Cubans, that the precursors of this national tragedy, can be traced back to the unsolicited arrival of the USS Maine into the harbor of Havana in 1898.  The questionable cause of the massive onboard explosion, its subsequent sinking in deep waters by the US Navy and a full-blown mass media hysteria of “Remember the Maine” with cries for revenge, suggests a master conspiracy plan, designed to create the Cuban-American-Hispanic war.

After thirty years on the battle field in one of the most unequal  struggle in the history of mankind, the fully integrated Cuban Army of Independence had literally defeated the exhausted Spanish Occupying Forces, when the United States unilaterally decided to intervene in Cuba with a racist, segregated armada.

This military skirmish, which lasted less than three months and  most US casualties  were due to tropical diseases,  set the stage for the intractable, century old grievances, suspicion and resentment between the United States and Cuba, which like a suppurating, painful wound, refuse to heal.

Cubans were not allowed at the surrendering ceremony of the Spanish Army in Santiago de Cuba, nor were they allowed months later at the Paris Conference, where Spain officially relinquished all of its rights over the Philippines, Guam, Puerto Rico and for all legal purposes Cuba to the United States, turning this country overnight, into an empire with the stroke of a pen.

With the help of corrupt, unprincipled, opportunists Cuban politicians, tens of US companies prompted by the US State Department, flocked to Cuba and purchased for pennies on the dollar, millions of acres of prime farmland, sugar factories, utilities, transportation, banks, industries, energy, communication and every other important sectors of the Cuban economy.

Politically, Cuba was strapped to United States through the Monroe Doctrine and the Platt Amendment, a stranglehold that prohibited Cuba from entering into any legal, economic or political agreement with any nation, without prior approval by the US State Department.

Equally damaging to the country’s future, was the introduction of government corruption, cronyism, kick back, favoritism and political parties divorced from their people, which corroded the moral fiber of the nascent nation.

Still, the worst legacy left in Cuba by the presence of the United States since 1898 through 1958, was the resurrection of racism, segregation, marginalization and other divisive tools based upon class, creed, color and ethnic origin as it is in the United States.

This monstrosity have weaken the substrate of  a once solidly unified nation on the battlefield, whose motto was more than white, more than black more than mulatto, just say Cuban, by exposing its integrity to machinations by foreign manipulations of our people sensitivities, enhancing conflicts and by endangering the security and future of our nation. 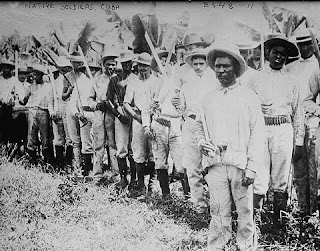 Chapter two will focus on this cancer, which sadly, is alive and well in Cuba.
Posted by hassan at 7:36 PM