My African Pilgrimage. Part I

"My African Pilgrimage, Part I"
Alberto N. Jones
May 14, 2011
On Saturday April 23rd, I began a lifetime dream at the Miami International Airport, as I departed on a long journey to Africa from where our ancestors were forcefully kidnapped five centuries ago.
Kept in bondage for over three hundred years in their newly acquired country in the new world, they were never compensated for their sweat, tears, blood and deaths, building everything visible and invisible around us and finally released into racism, segregation and ignorance 150 years ago.
Our seven-man delegation arrived at 5:00 AM at the Leopold S. Senghor International Airport in Dakar, Senegal after an 11 hour flight, where we were warmly greeted with a Welcome Home!! by an efficient and friendly immigration and customs personnel.
After picking up our bags, we got our first taste of the country financial ills, as a number of people struggled to carry our bags, begged for money and the general environment was in urgent need of upkeep.Before arriving at our hotel, we stopped at the enormous, 27 million dollar, 170 foot-tall bronze statute on a hill top with three superimposed figures representing the fresh start African countries made when they declared independence 50 years ago, which have drawn criticism from every sector, especially for not evoking African themes and for having outsourced this entire project to a Korean construction firm, in a country with 50% unemployment. 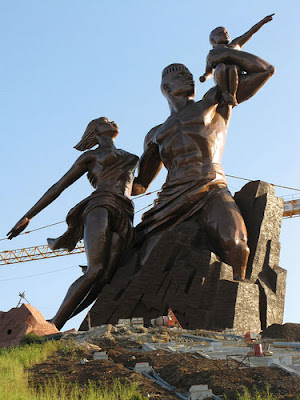 The hotel was nice with a number of amenities, but once you stepped out beyond its boundaries, there were tens of thousands of people huddled against buildings walls with huge assortment of handcrafts, garments, food, supplies, parts or equipment for sale, where potential customers negotiated, bargained, coerced or left, pressuring for better prices.
Some basic statistics:
Independence April 4, 1960
Area 198,840 Km2
Population 12.3 Million
Without reliable drinking water 31%
Undernourished 17%
Longevity 59 years%
Infant mortality 58%
Illiteracy 59%
Secondary school enrollment 11%
GDP 12.6 Billion
Annual Per Capita 1,900 dollars
Employment, primarily in service 56%
Below poverty line ($1.25/day) 34%
USAID 2009 119.9 Millions
Socio-economic world standing 144 among 169 nations
As dramatic as these numbers are, they represent a national average. If these were applied solely to the countryside or the periphery of Dakar, which are overflowing with crowded huts without running water, sewer, electricity, open drainage filled with rotting, stagnating water, garbage and every hazardous microorganism, these stats would be far worse. 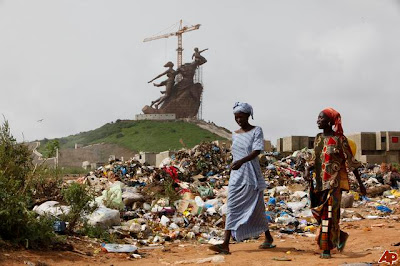 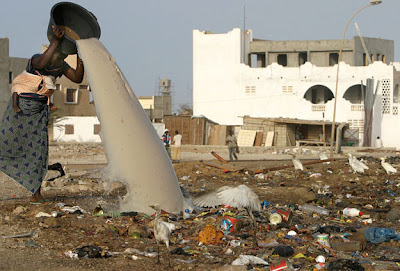 A visit to a Fulani village in the desert, took us back in time to the X century. Scattered thatched huts in a barren terrain headed by a chief, while most adults are engaged in survival agriculture, fishing or worst, working at the Pink Lake, the most horrendous job on earth.This shallow body of water takes a pink hue under bright sun light in which, hundreds of wooden boats with 2-3 men on board, armed with long shovels, digs up a very salty sand which is deposited into their boats and when they are full, are rowed to the shoreline. 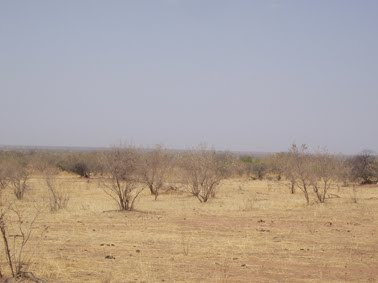 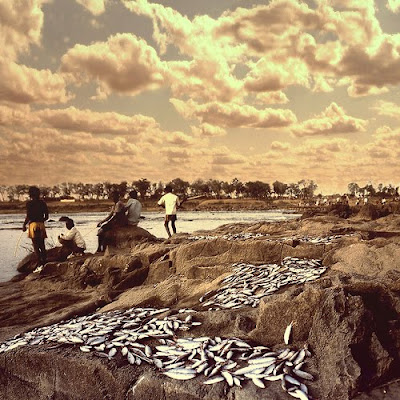 There the cargo is transferred into large tubs weighing over 100 pounds each, that an army of women haul on their heads and deposit on dry land forming mounds that are left to dry in the sun and for which they are paid in kind, one bag of salt for every ten delivered. 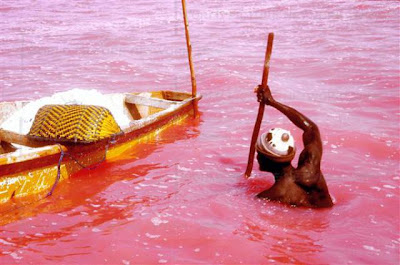 This is how, this cruel, sub-human enterprise, which has never been investigated by the United Nations Human Right Commission, enables wealthy, powerful, self-righteous Europe to acquire all the salt they need to deice their slippery, snow laden roadways in winter, without ever asking at what human cost. 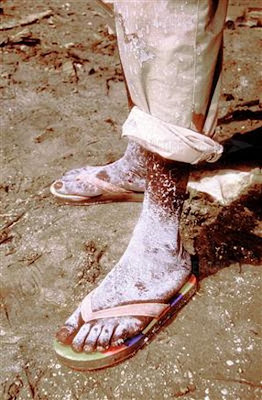 Senegal has had a longstanding close relations with western countries and it is France key ally in Africa. Senegal was an anti-Communist bastion during the cold war and have contributed Peace Keeping forces to Haiti, Democratic Republic of Congo, Darfur, Liberia, Ivory Coast and others.

Tens of thousands of Senegalese soldiers fought and died alongside France in WWI whose efforts and courage was not recognized nor paid veterans benefits until 2006. 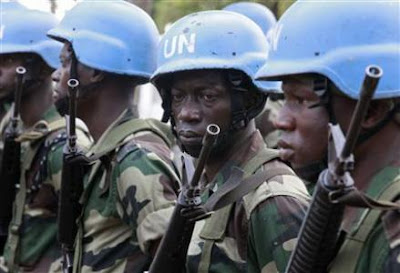 A shocking visit to a fishing village, revealed hundreds of brightly colored canoes beached or unloading tons of the day catch, as thousands of people buys, clean, puts in carts or on their heads in frightening unsanitary condition, loads of fish that are rushed out of the area, hoping to find buyers who can help them survive their financial crisis.

But worse was yet to come. The following morning after a 30 minutes ferry ride from Dakar, we landed on the infamous Goree Island, one of the 3 or 4 similar slave concentration camps that under orders of the United Nations, are preserved and serve as a grim reminder of the estimated 20 millions slaves that were forcefully ripped away from their lands, incarcerated, beaten, raped, died or were sent through the Door of No Return.

As we tour this 23 hectare island of unpaved roads and ally, government buildings, numerous churches of various denominations, business, defensive forts and the slave holding fort, it is easy to recreate the wicked mind of those who conceived this monstrosity.

After crossing a lift bridge over a body of shark infested waters, one enters a hall that leads to an open courtyard. Surrounding this courtyard were a variety of cells for males, females, infants, recalcitrant, death, a chapel and a tunnel leading to the Door of No Return.

Males cells appeared to be approximately 20x10 feet, with no lighting and a single ventilation opening of approximately 1 ½ x 1 ½ feet for 150 slaves. A shallow gutter close to the wall doubled as a toilet. All slaves would be taken out for one hour in the evenings while the area was flushed out with sea water. Slaves weighing less than 60 kilos were not shipped out, assuming they would not endure the two months journey.

Females cells were larger for 400 slaves. Recalcitrant cell was a small hole in the wall with no ventilation, which was used for any slave difficult to handle, who would refuse orders or talk back. Any slave who fought back was forced into a similar but smaller cell, where he would be locked-up without food or water and condemned to a horrible death from thirst in 3-4 days. All slaves severely ill or dead, were thrown in the shark infested sea outside the walls of the fort.

Because of a host of tropical diseases, most Europeans were single males, leading to widespread rape by the prison guards. The governor’s living quarters was large, spacious, airy and located on the second floor, from where he occasionally would stand on the balcony to review all nude slave females, choose one, who would be bathed and sent up a back stairs to his room. 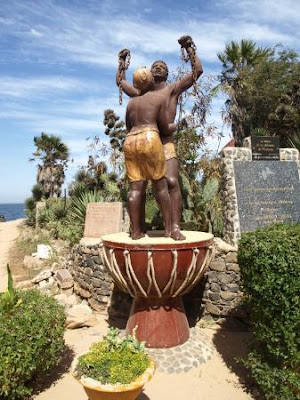 Those who got pregnant were released from the dungeon into farm-type camps, where their mulatto offspring would be born, sent to school and later allowed to work in the household as “house slave”, further dividing the slave community.

My personal assessment of the socio-economic situation of Senegal is a that of a very complex, intractable social stagnation, that whatever political, social, economic or religious policies have been in place since 1960, have proven to be incapable of addressing the basic needs of its society.

Rampant hunger, poverty, illiteracy, lack of healthcare, widespread transmissible diseases, unemployment and lack of development demands a different approach to fulfill the hopes and expectation of its population.

Because tens of thousands of slaves shipped to all Caribbean islands may have been held in these infamous dungeon at any given time, Cuba has a moral obligation to share its solidarity and expertise with the descendents of those victims, by helping them improve their health, education, sports and culture.

Equally important could be an economical boost that Cuba could provide to Senegal, by importing its surplus fisheries with insufficient market and/or by installing a fish sub-product plant, which could provide employment to hundreds, as we set an example for the rest of the world and begin erasing our unpayable debt of gratitude to Africa.
Posted by hassan at 11:09 AM