Elián's Tragedy and the Traiterous Behavior of El Duke

"Elián's Tragedy and the Traiterous Behavior of El Duke"
por Alberto Jones
January 23, 2000
*originally posted on afrocubaweb.com
During the summer of 1966, as a student in Germany, I went through my life most revolting experience, when I visited Buchenwald, one of Nazi Germany best known concentration camp. Without ever being there, seeing the ovens, the human skin lamp shades, the films, it would not be possible to fully capture the bestiality in many of us.
But most difficult to understand was that this extermination complex was located a few miles from Weimer, the highly educated, cultural center of Germany, where the cream of that society, took part regularly in music or arts festivals, pretending nothing was wrong or intentionally remaining silent, sanctifying such heinous deed.
Millions of people paid the ultimate price, because of our complacency, lack of courage or complicity. Sixty years after, it appears we have learned very little from this tragedy or as it was then, we are too busy, too selfish to care about the suffering of others.
The tragic events surrounding 6 year old Elian Gonzalez, who was found Thanksgiving Day clinging to an inner tube off the shores of South Florida after the drowning death of his mother and 9 others involved in an ill-fated, alien smuggling attempt, have shocked the conscience of millions of people around the world.
This child, who may have suffered permanent psychological trauma and more physical pain than most of us in our lifetime, continues to be forcibly retained in a foreign environment, surrounded by people he has never seen before, turned into a celebrity and plunged into a media frenzy by the heartless, vengeful, ultra-right-wing Cuban American pseudo-politicians in Miami and New Jersey.
In order to explain their absurd position, they are presenting the most bizarre, baseless arguments; as they perceive the well being of the child in direct relation with the availability of Nintendo, Tommy's or McDonalds, creating an artificial "Dream World" around him, which incidentally, does not apply to hundreds of other Cubans, Haitians, Afro-Americans or poor Anglo children in Miami and every other city in this country.
But what makes this action more despicable, is that they are knowingly, systematically applying against this innocent child, well established and universally accepted theories of "Conditioned Reflexes," which was demonstrated many years ago by Pavlov and others.
By showering this child with an ample variety of foods, garments, toys, Disney World etc., they are imprinting in his young brain a world he will no longer have, as soon as he is returned to his father, creating a vacuum that will be replaced by withdrawal, anxiety, depression, or a socially unfit time bomb, capable of going off any time.
Having been in this world for much longer than I would like to accept, I have experienced first hand, the brutality, cruelty, visciousness that humans are capable of exhibiting. But for the most time, we expect to see these subhuman behavior associated with civil unrest or other types of deranged environment, that may explain in part, such actions.
But to do that in cold blood to a fragile, timid, scarred child, is beyond all humanoid classification of these barbarians disguised as teachers, mothers, politicians, pediatricians, psychologists, sociologists and even clergy!
As an Afro-Cuban, I am deeply troubled by the casual reporting or limited coverage of this horrendous human experience in the Black media. With few exceptions, prominent leaders with the moral standing capable of expressing their disgust, have been conspicuously silent.
But above and beyond the morality of this issue, no other racial/ethnic group in the world, should be more sensitive to any perception of forcefully restraining and separating family members, based upon our own tragic experience in which family members were separated and dispersed throughout this hemisphere.
It must be emphasized also that what is being done to this defenseless child by the Cuban-American community in Miami, is nothing more than a rehash of what they did to the native community in Latin America as of 1492, to the African slaves as of 1512, to the Afro-Cuban community until 1959 in Cuba and to the Afro-American community in South Florida since 1960, which they have subjugated and made hopelessly dependent, inflicting a massive influx of drugs and other social ills.
But if all of the above is nauseating and repugnant, even more so was the spectacle of watching the Three Kings Parade in Miami, in which New York Yankee Afro-Cuban pitcher "El Duke" Hernandez was the Grand Marshall of this event, thereby sanctioning and giving approval to the past behavior of this group of right wing Cuban-Americans. 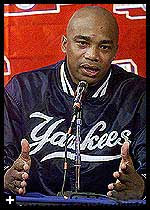 This individual, through his irresponsible action, has tried to obscure or ignore the horrendous racism, ignorance, poverty, hunger and the deaths of thousands of children through preventible causes inflicted on our people by these criminals when they owned the lives and property in Cuba.
This traitor cannot deny that if he did not feel it himself, he heard from his parents, neighbors, how it was and what these people did to us. 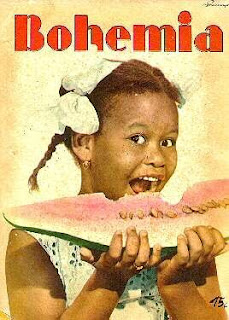 These Miami Cuban-Americans, rightfully driven out of Cuba FOREVER, were the enforcers and perpetrators of our 29% illiteracy rate, 24% infant mortality, segregated neighborhoods, beaches, clubs. They forced us to live in huts without electricity, running water, sewer, no jobs, and openly prohibited us to work in department stores, banks, office settings or even drive a provincial bus.
These are the same individuals that forced Nat King Cole, Josephine Baker and other luminaries, to use the kitchen door in order to enter the night club where they were to perform. These are the same individuals that bragged that their puppet President Batista, was denied entry in the Havana Yatch Club.
These are the same individuals, that when beaches and clubs were integrated in Cuba in 1960,
they UNANIMOUSLY refused to enter to these places and renamed them SOLOVANNICHE. Later, we were able to unscramble this as SOLO VAN NICHE or ONLY WHERE NIGGERS GO!
But what makes more blatant, offensive and painful the irresponsible behavior of "El Duque" is the extensive and proud history of Black Cubans, who since the Ladder Conspiracy against slavery have crafted one of the most dignified, honorable and heroic history in this hemisphere.
No Afro-Cuban can ever forgive the affront to the memory of Antonio Maceo, Guillermon Moncada or Quintin Banderas. Mariana Grajales, the Black mother of the Cuban Nation, who gave the lives of 9 members of her family in the war of independence, may have cried for the first time in her life, to know, that such a THING, could be one of us!
But his indignity has no parallel. Made drunk by the few millions paid to him by his team owners, he feels compelled to be on his knees, to accept his self-inflicted inferiority, to forgive and forget our history.
Jesus Menendez, the sugar industry union leader, with approximately the same or less level of education than this other Personality, but with an absolute sense of dignity, self respect and love for his nation, was called to the White House, -not for the 6 million that is paid to "El Duque"- he was handed a blank, signed, federal check for him to fill out and stop the strike in Cuba. He refused the check, returned to Cuba and under orders "from above" was shot as he detrained in the station in Mazanillo. 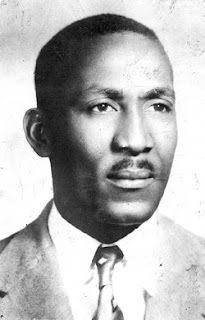 Jesus Menendez is another of the endless list of Afro-Cubans heros who Cubans respect, admire and imitates on a daily basis. "El Duque" will be remembered by the Cubans for opposite reasons!
I am forced to admit, that the actions of "El Duque" Hernandez, have created in me the same revolting experience as the one I experienced in Buchenwald 35 years ago and never thought I would ever have to relive!
Posted by hassan at 2:54 AM