The Paradox of Two Cuban Women

Sometime during the year 2006, CNN executives conceived a project that would be different than everything they had done until then, in which, rather than the typical 24/7 news filled with death, destruction and human calamity to which we have become addicted, this project would be devoted entirely to pay hommage to ordinary people doing extraordinary things around the world.

On December 6, 2007 in the incredibly beautiful setting of the New York Museum of Natural History, 2.5 billions viewers around the world were treated to a detailed audio-visual desciption of the activities of all ten finalists, from which Irania Martinez from Guantanamo, Cuba, was declared by a high powered Blue Ribbon commission the winner of Defending the Planet. 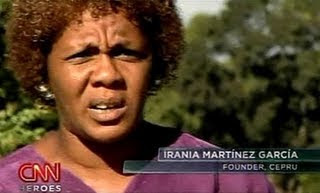 The incredible honor that was bestowed upon this modest, Afro-Cuban, un-wed mother, who single handedly transformed a solid waste toxic dump in Guantanamo into a Garden of Eden - as described by CNN - was able at the same time, to put her city, her community and its people on the world map.

How could this unprecedented event come about? An accidental confluence of unrelated events, brought into fruition the most important development in the history of Guantanamo.
Some facts:
The sudden collapse of the Soviet Union and all of eastern European socialist countries meant for Cuba, loosing overnight 40% of its import/export markets, financial exchange, raw material, supplies, technical assistance and a traumatic mental impact of being without socio/political/financial allies and the threat of mass hunger, lack of medicine, medical supplies, endless blackouts and an imminent collapse as predicted by the "Domino" theory.

In what history will record as an equally daring act by Fidel Castro, similar to when he attacked the Moncada Garrison in 1953, led the sea invasion to ignite the revolution in 1956, directed the counterattack at the Bay of Pigs in 1961, the Cuban Missile Crisis in 1962 and led the military strategy that defeated Apartheid and the most powerful war machine on the African continent. In impassioned speaches, he called upon the Cuban people to stand tall in defense of the fatherland in the image of our forefathers, who forged Cuba's independence with their blood, their lives, midwifing the Special Period in times of Peace. The level of need, deprivations, suffering and related deaths that took place in Cuba during this period, was a stark reminder of a devastated Europe at the end of WW II.

Doing what Cuba have done best whenever it is down and written off by academics and politicians, a flurry of ideas, projects, visions and new found energies came into play, dismantling all fatalistic predictions. Among the many novel ideas that were put in motion, were the immediate transformation of every city vacant lot into a community vegetable garden. As an agricultural technician, Irania Martinez was assigned to the marginal neighborhood of south Isleta. 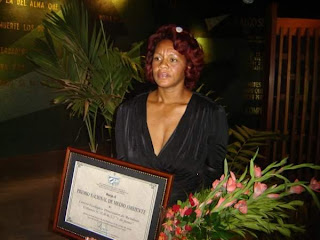 Because of an acute lack of spare parts, fuel, tires etc., all solid waste trucks in Guantanamo were grounded and exchanged for horse driven wagons. Additionally, the city was sub-diveded into blocks to make it manageable by this new collection technique, by creating tens of mini-solid waste dumps in lieu of the centralized old dump.

When Irania arrived in Isleta, she was received by swarms of flies, ants, rodents, choking smoke from burning household solid waste contaminated with cancerigenous plastic containers and an offensive odor from decomposing matter.

After bringing this challenging health hazard to the attention of her managers, she was told that, that was not of her competence and that she should limit herself to do what she was sent there to do. She not only rejected such orders, she began organizing neighbors and asking for volunteer workers, to start addressing that critical problem. 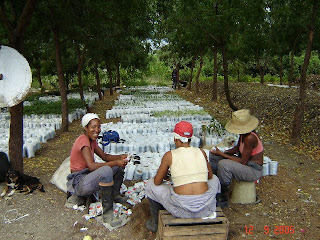 A few joined and without any personal protection gears, salary or material support, they started sorting, recycling glass, metal, composting and creating a seedling of thousands of hardwood, ornamental and fruits trees, that were given away to everyone willing to nurture a plant.

As a result of the dire humanitarian drama that Cuba in general and Guantanamo in particular was enduring in 1992 and after, we begged, packaged and sent with everyone willing to take an extra suitcase and later through every Cuba solidarity group, tons of medical, educational, physically challenged and sport supplies that were generously donated to us by peace loving, caring people in the state of Florida and beyond.

This working relationship reached its peak after hurricane Gordon hit Guantanamo in 1994 and we were able in collaboration with others, to send the first four engine cargo plane loaded with humanitarian assistance to land in Cuba since 1959. This act created a permanent working relation with the healthcare, education and the physically challenged association of that province.
Because this activity needed to be structured and institutionalized, I became a founding member of US-Cuba Sister City, founded the Caribbean American Children Foundation and an officer in the St Augustine-Baracoa Friendship Association.

These legal proceedings allowed us to apply for and receive multiple licenses from the US Treasury and Commerce Department, which enabled us to send millions of dollars in medicine, medical supplies, sports, physically challenged, cultural and environmental health supplies.

This factor, led members of different institutions to invite us to visit CEPRU or the Ecological Center For Processing Urban Refuse. I promised I would, but was not convinced that a solid waste dump was the most interesting place to spend my limited time during my family visits to Guantanamo.

On a second visit to Guantanamo, I was reminded of their desire for me to visit CEPRU. Cornered and with no other possibility, I accepted the invitation and I was doomed. The image I came across that day will live with me forever, as men and women, young and old, physically fit and challenged, worked tireless with their bare hands, ragged clothing, without personal protection, sorting through piles of household refuse. 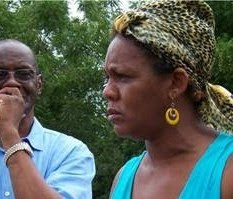 There and then, I promised that we would support the heroic and dangerous work they were doing, by providing them with work clothing, gloves, mask, bicycles, work tools, help build a kitchen, bathroom, laundry room, a computer/classroom, camera and forbade everyone from taking their contaminated work clothes home.

These modest signs of respect and solidarity became a real boost to each of them, who multiplied their efforts and transformed their workplace into the enviroment that so impressed the visiting CNN team.

Today CEPRU has a midsize nursery with thousands of medicinal herbs, flowers, ornamental, fruits and hardwood. A humid pond for butterflies reproduction is about to be completed, a small goat dairy farm for lactose intolerant hospitalized babies is in production, monthly environmental seminars with specialists in the field are held on premises and primary school children are encouraged to visit and learn to love and respect nature. 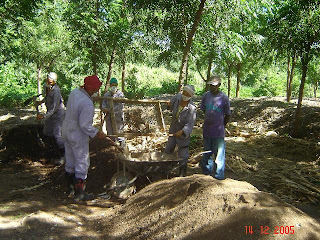 It was our hopes, that after CEPRU had been awarded meritorious recognitions by the Ministry of Agriculture, Ministry of Science and Environment, the regional FAO office and the stunning CNN HEROES first prize, this project would be widely acclaimed by everyone in Cuba and used as a springboard to raise the awareness of the threats to country's environment.

Unfortunately, that has not been the case. Support has been questionable and bureaucratic impediments have stalled a project, "Oxygen For All," whose goals were to plant one millon fruit, ornamental, hardwood and other trees per year, intended to revert the desertfication/salinization on the southern coast of Oriente.

Yet, it is Yoani Sanchez - not Irania Martinez who have done so much on behalf of her community and earned international respect for her country - who the hostile, anti-Cuba media, have turned into an international celebrity. 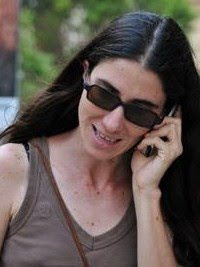 The path that Yoani Sanchez have taken to earn a living, achieve transitory fame at the expense of degrading, tainting its image and demoralizing her country, is simply revolting. One of the moral principles we learned early in our lives , is to debate and settle all household differences within our homes, not outside of its confines.

Would this pseudo-phillologist have earned world wide repute and her "works" translated into 17 languages, if she had focused on the 500 plus minority students murdered viciously on the streets of Chicago in 2008?

Would anyone be interested in her writings if she would report on a Hispanic 18 year old youngster shot 11 times in his back, side and forehead in Queens on 11/22/09, by members of the brutal New York Police force?

Have Yoani Sanchez ever heard about Elinor Bumpers, a 84 year old grandmother, shot six times by New York cops in her Bronx apartment in 1984? How about South African emigrant Amadou Diallo, shot at 41 times and hit 19 times while opening his apartment door in Bronx, or Haitian Abner Louima, viciously sodomized with a broom stick in a police precinct in Brooklyn, New York?

Should I remind Yoani Sanchez and encourage her to research the MOVE organization in Philladelphia, on whose home a police helicopter dropped a 4 pound C-4 plastic bomb in 1985, calcinating 11 people among which were 5 children and no one was found guilty?

Should I assume Ms Yoani Sanchez would have preferred any of those police mentioned above, would have handled her recent regretful and uncalled for scuffle with members of the police in Havana?

It is pathetic to see how Yoani Sanchez and her husband have allowed themselves to be used by these Cuba-haters, who have financed their lifestyles for years, provided them with abundant cash to purchase endless internet connection in luxury hotels spewing their excretions and operate a costly web site moderated in Germany, without ever having to explain who is picking up the tab. 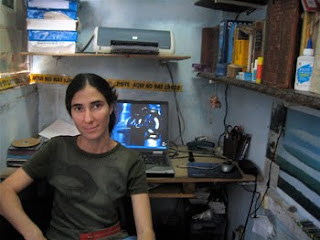 No one other than the Cuban authorities are to be blamed for this fiasco, by willfully denying Irania her rightful place in society and for creating a vacuum, where opportunist like Yoani, her husband and friends could walk through from their obscure past into world celebs.

It is everyone's right to agree or disagree with their government and/or its policies. What is repulsive is to denigrate your country and its people in search of false glory.

Fortunately, neither one of them will be on CNN HEROES Third Awards!
Posted by hassan at 7:15 PM

New comments are not allowed.